By Radu Vunvulea December 13, 2016
In one of my latest posts we took a look on Azure Functions and how we can write an Azure Function that extracts the GPS coordinates from a picture and draw them on the picture itself.

Until a few weeks before, we were able to create and manage Azure Functions only from the portal or using the API (e.g. using Power Shell library). Starting from now, there is a new tool for Visual Studio that allow us to create and write functions directly from Visual Studio.
The tool allow us to run locally our functions and tests them. Pretty cool, especially when you need to write and maintenance more than a dozen of them. The current version is extremely stable. To tell you the truth, is expected to encounter issues, but works great.
The Azure Function tool comes with a Azure Function project template. Under this projects, each function will be added in a separate folder. The structure of the project and each function folder is the same to the one that we can find on Azure Portal, including function.json, project.json and run.csx. 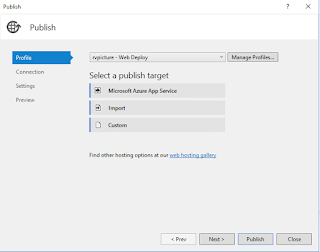 There are multiple templates for functions, for different languages and triggers. I was able to find almost all the actions and binding that you can do from the portal.
For the case that we want to cover to use as trigger creation of a new file in OneDrive, I would recommend to create the function initially in the portal or at least the API Connection. If you already had the API Connection created, than you only need to specify in the binding the write connection - 'onedrive_ONEDRIVE'. You might encounter similar problems when triggers are SaaS or complex sources, but I expect that this will be solved in the future - we are still in beta.

Run Azure Function on you development machine
Running Azure Function on your local machine is like running any other web app locally. The trick is how you trigger different actions. For simple triggers, inputs and outputs things will go very smooth, but for more complex scenarios you might encounter small problems (tools are still in beta now).
My experience was pretty good with time trigger functions, but for more complex one I had some issues running locally and I preferred to deploy them directly to Azure for now.

Deploy Azure Function from Visual Studio
The deployment is done in the same way as you would do a deployment of a web application. Write click on the project and click Publish. You'll need to specify an existing function app that you already created in the portal or create a new one.
There is nothing special or different from deploying a web app.

As for an web app, you can attach a debugger to you function and do remote debugging. I'm so exited to see that nowadays remote debugging is simple and you don't need to lose 1 days to configure and to special setup.

As any other services for Azure, Azure Functions is fully integrated with continuous integration system. Different types of repositories are supported, from GitHub to TFS.
When you want to configure CI, you should remember that you'll configure it for the the Function App instance and not for each Azure Function. The configuration can be found in 'Function app settings > Deploy > Continuous Integration'.

If you configure as source for CI a repository where you have multiple projects, you might encounter during the CI process the following error:

Unable to determine which solution file to build

In this case don't panic. This happens because the CI is not able to identify what project you want to deploy. To resolve this problem you need to create a filed named '.deployment' in the root of the repository and specify the path to the project. In my case, I have on my GitHub repository the Azure Function project in the following path 'Azure/azure-function-extractgpslocation-onedrive-drawwatermark-git-ci-integration/'. This means that the .deployment' shall have the following content

More about how you can customize the deployment using .deployment and Kudu can be found on this page.

Conclusion
In this post we saw the current integration of Azure Function with Visual Studio and Continuous Integration. Things are looking very good. Even if we are only in beta, the VS Tools are stable and full with features.
In the next post we will take an look on Azure Functions from functionality, features and price perspective.