By Radu Vunvulea April 30, 2016
A week ago, one of our team member modified a script that clean (removes) Azure resources, based on a naming convention. Because the number of our Azure Subscription is limited, the Development Team is sharing the same subscription between them and for DEV and TEST environment.
To be able to have a control on resources and trace the owner of them we have: 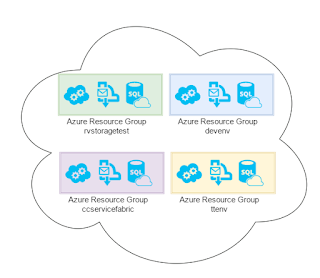 As we can see in the above diagram, Azure Resource Groups can be used with success to group together different resources that have a logic for your application or from a business perspective.

Coming back to the initial cleaning script, there was a small bug in the script, that didn't took into account the prefix of Azure Resource Groups and removed all the resources that were under that subscription.

Now, the questions is what we can do to avoid  this kind of things in the future. Of course, multiple subscriptions would be great, but this will not happen. A review of the script from another team member would work also, but not all the time there will be time for things like this and bugs like this cannot be seen each time.

How nice it would be to have a flag on our resources, that would not allow anybody to remove (delete) the resources. This features exist on AWS for some time and wait.... we forgot that from last year we have a similar feature on Azure also.
This feature is called "Resource Lock" and allows us to lock a resource for deletion. People will be able to modify it, but as long as this flag is set, nobody will be able to delete this resource. In this way we can avoid in the future situations like this.
This lock can be set not only when we create the resource, but also after it and can be used for any time of resource. The Lock can be set using Power Shell by specifying LockLevel flag to 'CanNotDelete' of using ARM.

More information about this feature can be found on Azure page: https://azure.microsoft.com/en-us/documentation/articles/resource-group-lock-resources/