Visual Studio 2012 was already lunched some time ago. A lot of new feature were introduce with this new version. Some changes from Visual Studio 2012 are big and from some point of view, the difference between the old version of Visual Studio and the new one are like the difference between Windows 8 and Windows 7.
I think that a lot of developers already played a little with this new version of Visual Studio. The first thing that you notify after installing it is the time that is necessary to load the new Visual Studio – that is very low. The second thing is the new UI, that is Metro like.
One zone where Visual Studio 2012 made a big step forward was Unit Testing. A lot of new feature were introduce in this area that not only increase the productivity of the developer, but also increase the quality of the code. In the next part of the post we will discover what are the main new features that were introduce from the unit testing perspective.

Run tests after each build

In the old version of Visual Studio, we didn’t have a build in mechanism to run unit tests after each build. Because of this we had to click on “Run All Tests” each time when we build the solution. This could be annoying after a while. Visual Studio 2012 already has this feature build in and with only one click we can activate or deactivate this feature. 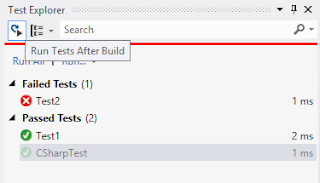 All the tests run in background, without bothering us.

Debug/Run tests from direct from code

How many time you had to go to the Test Explorer window to be able to run your current test. From now one, Visual Studio 2012 have a shourcut in the menu that will run the test that are selected in the code. 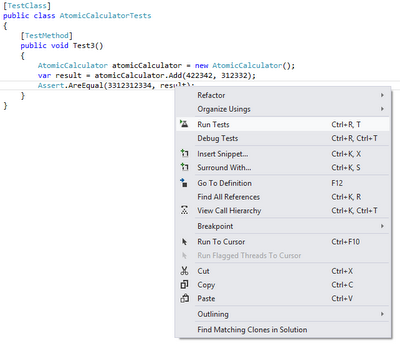 Group and run unit test based on the category

From now one we can add one or more categories to our unit test. This attribute can be added not only to each test in part but also to the unit test class. Using this feature we can run unit tests only from a specific category. This is a great feature when not only on the developers’ machine, but also on the build machines.

To be able to run the unit tests that have a specific category from command line we need to specify the TestCaseFilter option:

Until now, if we had a unit test that would check if a method throws an expected exception; we would have to decorate our method with an attribute. But this is not the best solution, because there were cases when we could not determine precisely the source of the exception.

In this moment this feature is available only for Windows Store Application. We hope that this new feature will be also available for other type of projects also.

Unit testing is a lot easier with this new version of Visual Studio. These are only a part of the new features that Visual Studio 2012 brought to us. You can try it and discover by yourself these new great features.