By Radu Vunvulea January 04, 2018
In the last post I added the extra functionality that would allow me to know when was the last time when the device was online and last time when a command was received by the device. Additional to this I added also a state of each device, even if I was not collecting the device state.
Now, it is the moment to add the state functionality to the garage doors (open/close)

Context
The current system is simple, allowing us to trigger the garage door action, without being able to know if we close or open the door. This might create confusion especially when you control the doors from remote controls too.
By adding state functionality to the system, we would be able to know if the doors are open or close. On top of this we could also add actions like open/close the doors and the system could decide if the door is open or not and to close it.

Limitations
The Beninca system that I have on the garage doors is not able to provide to us the doors state. It is just a simple door mechanism that is only able to trigger the doors move. To overcome this limitation, we need to add a physical mechanism that can detect if the doors is open or not. 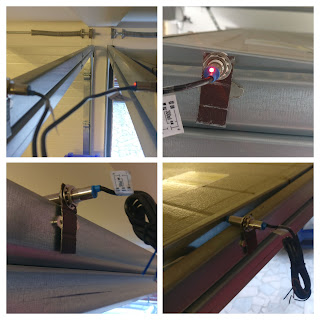 I decided to buy two proximity sensors that are part of “LJ12A3” family. More exactly LJ12A3 4 ZBX, that are cheap and can detect metal that is as far as 4 mm. In comparison with classical mechanical sensors (push buttons), it is more easily to mount and does not require direct contact.
I also avoided making any holes in the metal frame of the doors. To be able to mount the proximity sensor I used some magnets that I had from an old HDDs. They work grate to fix the sensor to the metal frame. Using this approach, I have the flexibility to move the sensor in any position I want, based on my needs.
I was pretty luck that the cable that is between engine doors and Beninca box had three wires that were free. I used them to connect the proximity sensor to the ESP8266.

Backend Implantation
There were not too many things to change on the backend system. On the UI, I had to add the Open and Close buttons that would send over Azure Service Bus a message to the gateway.
On the gateway until now, I would return 200 HTTP code for no action and 201 code when the gate needs to move. On top of this, I added two additional codes 202 and 203.


For Open and Close actions I also added logic on the ESP8266 to take into account the current state of the door. When the device is checking for new commands, it is also providing us the current door state, that it is used on the UI.

ESP8266 Implementation
Logic become a little more complex, so I decided to extract two functions that would help me to trigger the gate move and another one that based on the HTTP code returned from the backend the right action is executed.

You can read data from proximity sensor using the analog or digital input. Initially I tried to use analog input, but the results were not the one that I expected. On the analog sensor, you can read the weight of metal that sensor detects, but in my case, I only need if metal is detected or not.
Using the digital input, there will be only two values that you would receive from the proximity sensor (0 or 1). 0 is returned when the sensor detects something in front of it and 1 when there is nothing in front of it.
On the backend system, I used value 0 when there is no state, 1 when the door is open and 2 when door is close. To match the same values on the device and to avoid confusions I added 1 to the value that was read from the proximity sensor.

This state is reported directly to the gateway when the device checks for new commands, using the Status parameter. Using the sensor state and the HTTP code that is returned from the gateway, the device can decide to trigger an action or not. For example, it does not make sense to trigger the close action if the door is already close.
The full Arduino code can be found at the end of the post.

When I made the physical connections, I did not had the same colors on all cables. Because of this when I made the final connection on the ESP8266 I have done some wrong connections and I ended up with close gate all the time. Don't forget to make notes on the paper, otherwise you might lose like mie 2h with it.

Digital vs analog read
Even if the analog read would provide more fidelity, I did not need this kind of level of details. Addition to this the risk for false positives errors would increase. Reading data from the sensor using the digital input it is just what I need.

Backward compatibility
The yard doors are still using the old implementation and are not able to provide their state. To avoid any updates on the device I still expose on the gateway the old API that is only able to push the command to the device.

ESP8266 implementation bug
During the final test, I notified that when I move the door 1, after a few seconds door number two starts to move. Initially I thought that there is some wire that is not connected on the right location. After 30 minutes when I re-weld all the cables on the board, I realized that the issue was not hardware.
It was a copy/paste bug in my code. On the line of code where I call the function that moves the gate 2, I provided the http code returned for gate number 1 not 2. Yes, I know that a lot of refactoring can be done on the code, but the main purpose is to have fun on the automation, not on the code (yet - smile)


What next?
I plan to look on the current system that I have on the yard gates to see if it is possible to get the door state.