By Radu Vunvulea March 06, 2017
Context
When you create the infrastructure of a system, it is common to have two separate network. One that has access to public internet where front-end system are hosted (web pages, web services). Another network is without internet access, more protected from intruders. In this kind of secure network backend services are hosted, databases and other private services.

In this post we will do the following references: 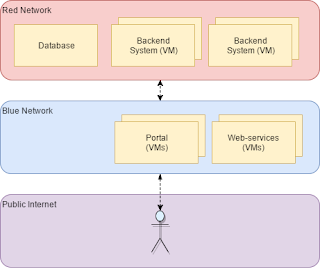 Can we have such a network topology on Azure?
You might say no, because the first expectation is that all services and system that run in Azure are public available from internet. Don't be surprise if the response is YES, you can have such a network topology in Azure.
We can have as many Red Networks as we want, isolated from public internet, with machines that talk only with other machines from the network. The number of network layers that we want to create is unlimited, we can have 2 as above, but we can have 3, 4 or even 100.

Is this possible? How you can configure it and make changes?
Even if it might sounds strange at the beginning, this is possible to do. Each Virtual Networks created in Azure has some basic characteristics that allows a network to be 100% isolated from the rest of the network, even if it is running over the same infrastructure.

Virtual Networks characteristics that enable us to have isolated networks


How can we create a Virtual Network without access from internet?
To have a more concrete example, we will go on the previous example where we had the Blue and Red Network, where Red Network didn't had direct access to internet. Red Networks allows traffic only from Red Network of from Blue Network.
To be able to isolate Red Network we  can use Network Security Rules, by defining the following rules:


Remember that rules in NGS are checked based on their order. If rule 4 applies, then no check for rule 5-8 will be done for the same package and so on. If you want allow all traffic from Blue to Red Network to be allowed, then remove rule 6 and change rule 4 in "All traffic from Blue Network VMs to Red Network VMs is allowed"
More complex rules can be defined, where we can restrict ports ranges or even what VMs from specific networks can be accessed.

Remarks: If we want RDP access on in Red Network. but without open RDP ports to the public internet we can configure a Point to Site VPN or a Site to Site VPN. In this way only from our local machined RDPs connection would be allowed or from our S2S network. 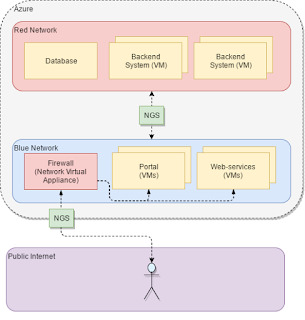 What are Virtual Appliance?
A virtual appliance is just another VM in your VNet that runs a software based appliance function, such as firewall, WAN optimization, or intrusion detection. You can create a route in Azure to route your VNet traffic through a virtual appliance to use its capabilities. For instance, NSGs can be used to provide security on your VNet. However, NSGs provide layer 4 Access Control List (ACL) to incoming and outgoing packets. If you want to use a layer 7 security model, you need to use a firewall appliance.

(Virtual) Network Appliance in Azure world is represented in general by VMs that allows us to to have virtual appliance like firewalls from 3rd parties vendors or as services like Azure VPN Gateway or Azure Application Gateway.
Most of the Network Appliance that are provided by Microsoft runs on top of custom hardware, in contrast with the one offered by 3rd parties that are running on VMs. From 3rd parties vendors, the most common are firewalls, when people prefer that all traffic that is coming from internet to go through a firewall (with custom rules and filters) before hitting internal endpoints.

Conclusion
As we seen above, Azure allows us to define virtual networks that are completely isolated from public internet.
Even if the job is easy I highly recommend to have a infrastructure guy to review the topology, architecture and rules that needs to be defined. For example rule 6 - "All traffic from any Blue Network to Red Network is denied." was defined for the cases when somebody get access to Blue Network but not the machines that can communicate from/to Blue/Red Network.