By Radu Vunvulea March 04, 2017
In this post we'll take a look on different types of load balancers that are available in Azure. The main scope is to understand what is the role of each load balancer and when we shall use each type of load balancer.

What is a Load Balancer?
It is a system that distributes the workload across multiple instances.
For more information related to how does it work and what are the base principles I invite you to take a look on Wikipedia - https://en.wikipedia.org/wiki/Load_balancing_(computing).


Each of them can be used in different situations and they never exclude each others. This means that you might need to use multiple types of Load Balancer, based on what you want to achieve.

This Load Balancer has the capacity to manage stateful connection (sticky connections), where requests from the same system/user will be redirected all the time to the same machine. Additional to this, for SSL connections, the secure connection is terminated on the Load Balancer itself. It means higher performance, but content is decrypted at Application Gateway level, content checked and encrypted again to be redirected to the target instance (SSL offload). 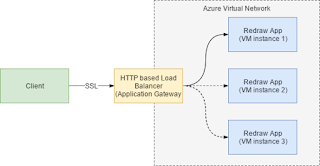 Application Gateway is not free. Even if it is included in some services out of the box (like App Service), for other cases like when you have VMs behind it, you'll need to pay per hour and the amount of data that is processed. 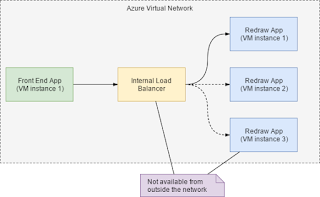 External Load Balancer
Similar with Internal Load Balancer, but used to balance incoming traffic that comes outside the Azure Virtual Network. Very often, everything that is outside the Virtual Network is called internet, because you don't have any control on it.
In contrast with HTTP based Load Balancer, the SSL connection is terminated at instance level. The redirection decision is done at transport and network layer. Because of this, this kind of balance can be used only for stateless connection (2 requests are not guaranteed that will be redirected to the same instance). 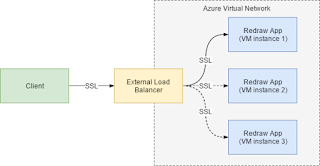 Can I use multiple Load Balancer for the same system?
Yes, you can and it is highly recommended. Let's take a example of a system that is deployed in multiple location (Asia, USA, Europe). The system is offering a image processing system, that allows people to count how many people are in a picture
The system contains a web endpoint used to submit pictures and a bunch of VMs running Linux that are processing the image. There are different types of VMs that analyze the image (one analyze and do the actual count, one do some pre-processing of the image and other types of VMs are isolate the human faces. 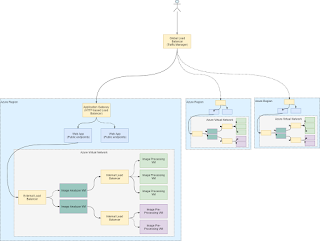 As you can see above in the diagram, Image Pre-Processing and Image Processing are in the same virtual network, behind an internal load balancer and automatically distribute the load. The image analyser VMs are accessible from the web applications - because of this an external load balancer needs to be used.
Web Applications already have an Application Gateway in front of them that balance the load. Additional to this, the system is deployed in 3 different regions across the globe. This means that we need a global load balancer to redirect the requests to the appropriate Azure Region when the system is deployed. Additional to this, global load balancer is able to detect a failure of the system and redirect traffic to the healthy regions, where the system runs as expected.

Conclusion
In this post we discover what are the 4 types of Load Balancers that are available on Azure. We shall remember the following things:


The last two types of load balancers are most common used together with VMs.