What is device twin
It’s a collection of properties that specific for each individual device. Device twins contains 3 types of structure (where the last two are similar, but have different roles)
You might find odd that there are 2 types of properties/structures in device twin – tags and desired/reported properties. From the usability point of view, this is useful and handy. Tags are used when you want to store information related to a device on the backend without sending it to the device.
A good example is customer ID or device location. There is no need to send this data to device if the device doesn’t need this data. In contrast, desired/reported properties are all the time send/received from device. Properties like device configuration, current status or different counters can be found inside them.
More about device twin

We could create such a tool, but it doesn't make sense. Also, the Azure IoT Hub team made a great job and created a desktop app that can be used to read, write device twins, see the list of devices, add new devices, sends commands and many more. The tool can be downloaded from here.
There is also a version for Node.JS - https://github.com/Azure/iothub-explorer

To be able to use this tool, you'll need to specify the connect string to IoT Hub in the first tab. Once you done this you can navigate to the 'Management' tab where all the devices that are registered are listed. Select one of the devices and click on 'Twin Pros'.
The new window displays all the information from device twin. Now, to set a new value of 'sensorDataTimeSampleInSec' will need to add it to the right panel and click on Send (as below). 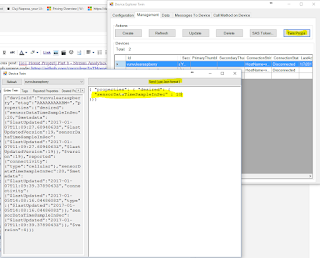 Done, we set a new desired properties, that can be received by device.

The support from Azure IoT Hub is great from this perspective. The API is well documented, full with examples. On top of this there are SDKs for the most important programming languages.
But for now, if doesn't make sense to develop such an application.

The 'getTwin' method of Device.Client retrieves our device twin from the backend, including the desired properties.
In the previous step we specified in the desired properties of device twin a property called 'sensorDataTimeSampleInSec'. Once we get this information we need to update the Config object with the new value and update the configuration file.
The update of the configuration object is simple. Once we update it, the most simple thing that we can do is to write all the configuration back to config file. For this we will use a module called 'jsonfile' that can be used with success when you need to read/write objects to files in JSON format.
Once we done this we need to stop the timer that was set in 'collectSensorData' and start a new one with the new time interval. To be able to do this we need to store the object that is retried by 'setInterval' method and call clearInterval in the moment when we wast to stop it.
The thing that I don't like is related to collectSensorInterval object that was set as global var in app.js. In this moment I didn't had time to find a better way how to persist this value and to be able to access it from the callback. For now it works.

And we are done. We can now change the time interval from backend and automatically the device will update himself and change the sensor data time sample.
The code that was impacted by this changes is app.js and DeviceCommunication.js 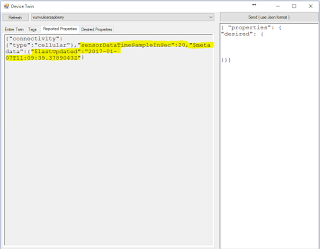 This can be done as follow:
We just set the new value and call update method of the reported property, where we specify the patch that we want to update.


Next Step
Will create an Azure Function to connect our system to a heating pump.
http://vunvulearadu.blogspot.ro/2017/03/iot-home-project-part-8-connecting-to.html