By Radu Vunvulea December 19, 2016
I started some time ago to play with Raspberry PI and GrovePI sensors. After playing for a few weeks I said that I need to do something more interesting.

Mission
Why not combine Raspberry PI and GrovePI sensors with Azure IoT Suite and detect if somebody is at the desk, show STOP sign if the given person is busy and so on. I'll start with very basic use-cases, that will evolve in time. The scope of the projects is to learn different technologies that can be used together 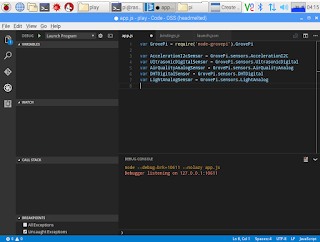 GrovePI Setup
The hardware setup is not complex. If you follow the steps from their web site or from the instruction book that comes with GrovePI box, you'll not have any kind of problems. Now, it is a good moment to take run a sample of an application written for GrovePI. Any kind of problems (hardware or software can be detected easily.

Next
The next step will be to attach the temperature and humidity sensor to the board and display the information to the LCD.