By Radu Vunvulea November 08, 2013
WOW Why? Because last two days (6-7 November 2013) I had the opportunity to participate at MSSummit 2013, that was held in Bucharest. It was one of the biggest IT event organized in Romania this year.
There were more than 1000 people, 5 simultaneous tracks and more than 45 speakers. It’s been a while since I’ve seen such an event in Romania. I was impressed about the event itself, location and the number of people.
The session list was extremely interesting, we had session held by David Chappell, Chris Capossela, Michael Palermo and so on. All the sessions were great, we had the opportunity to learn and discover new stuff. After this event we could say that Microsoft is full of surprising things (in the good way).
At this event I was invited as a speaker and I held two sessions where I talked about how we can write and load tests using Visual Studio 2013 and Windows Azure. In the second session I talked about fluent communication between client – server – client using SignalR.
Special thanks for the attendees that stayed until 18:30 in the last day of the event.
I hope that next year Microsoft Romania will organize another MSSummit. This is a great conference that can grow and become very big and powerful.
In this following picture I’m with my colleagues from iQuest Group. 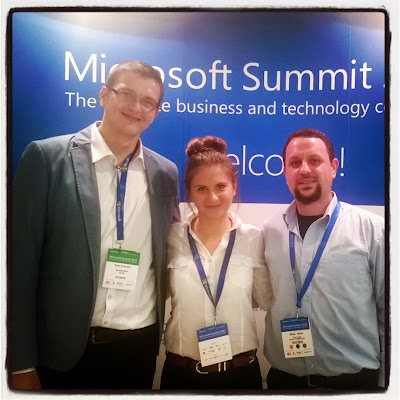